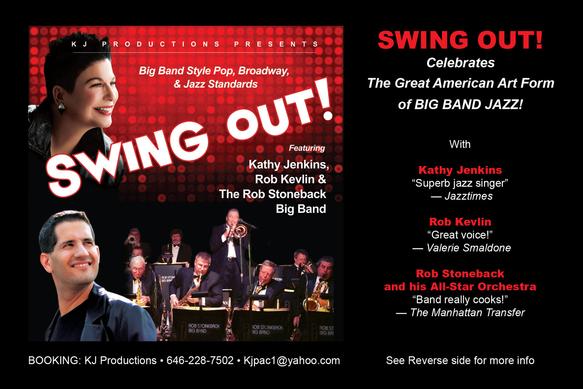 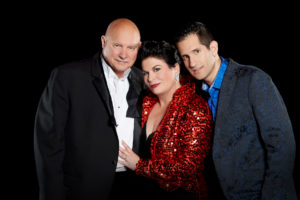 SWING OUT! is an exciting concert show
full of original arrangements of pop, broadway and jazz standards.
Interspersed with duets, personal patter and individual stories,
Swing Out ENTERTAINS!

You’ll hear golden nuggets like
“It Don’t Mean a Thing (if it Ain’t Got That Swing)”
and “A Night in Tunisia” as well as
Stoneback’s smokin’ vocal arrangements of
“Getting to Know You” and “Mack the Knife.”

Jenkins electrifies with her Minnelli-ish version
of “My Favorite Things” and
Streisand’s “Come Rain or Come Shine”.
Kevlin thrills with his soulful bluesy version of
“Feeling Good” and wows with his rendition of
Buble’s “Crazy Little Thing Called Love”.

The Rob Stoneback 17-piece swinging Big Band
has performed all over the Mid-Atlantic region,
including New York, Philadelphia, Atlantic City,
Baltimore and yes, even Lincoln Center.
Members of the band include alumni
from the most famous orchestras in history.
They’ve performed with such stars as
Natalie Cole, Johnny Mathis, Aretha Franklin,
The Manhattan Transfer, and Olivia Newton-John
to name a few.
robstonebackbigband.com

Veteran Vocalist Kathy Jenkins
met Band Leader, trombonist Rob Stoneback
while touring with the United States Air Force Band
performing in hundreds of concerts across America and Europe.
Jenkins contracted Stoneback at that time
to write arrangements for her NYC big band debut.
Now an accomplished artist,
Jenkins has recorded several CD’s
that have hit high notes with the critics.
No less an authority than Jazz Times called her a “Superb jazz singer…”

Vocalist Rob Kevlin,
a rising star whose international television win
at the USA World Showcase from
the MGM Grand in Las Vegas and
debut album caught the attention of 87.7FM,
met Jenkins through a radio spokesperson
who made the alliance and the rest is history.
They made their debut together from the Triad in NYC
where their cabaret theatre show was broadcast on NTV America on “Time Out”,
a celebrity television news program
featuring current stars and top talent.
robkevlin.com

The vocal artistry of this duo has continued
to thrill audiences with various orchestras
including performances with the Igor Butman Moscow JazzOrchestra,
The Nick Levinovsky Big Band, The Rob Stoneback Big Band
and Pete Swan’s Big Band Express at the legendary “Swing 46”
in NYC and other notable jazz venues.

“Swing Out” Stoneback, Jenkins and Kevlin 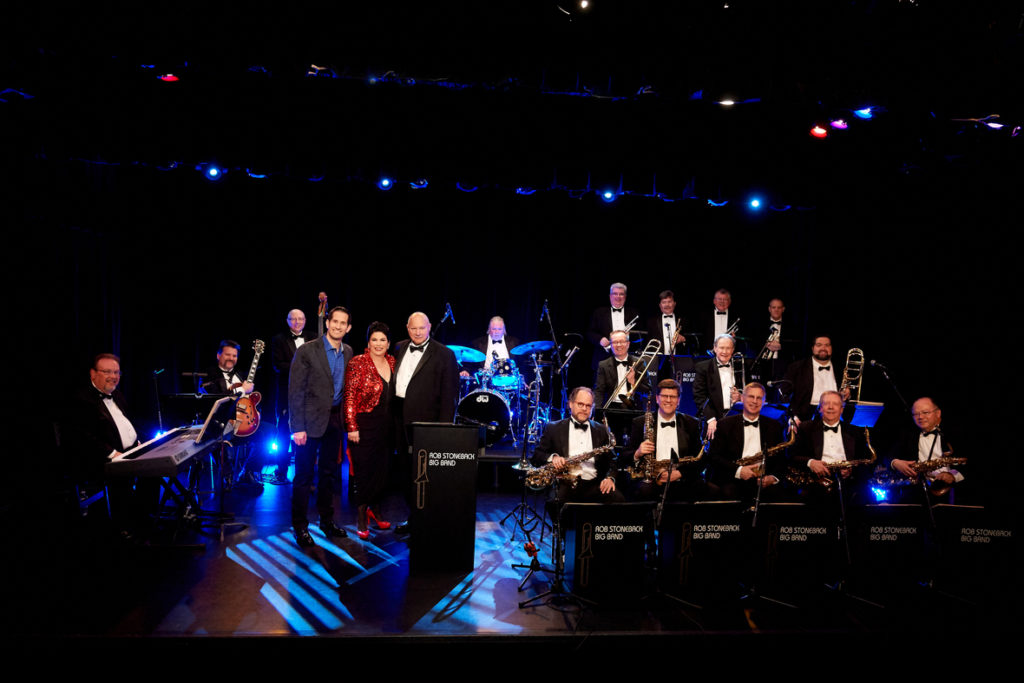